This report has been prepared to share the lessons learnt from a formwork failure incident. The incident involved the structural failure of temporary works during the placement of concrete to a section of the Ground Floor suspended slab. There were no injuries from this incident and the failure sequence of the collapse allowed time for a full evacuation of the site. Significant demolition and rectification work was required as a consequence of the formwork collapse.

Generally construction of multi-storey in-situ concrete framed buildings relies on the mass of wet concrete being temporarily supported and the resultant load shared by the floors below. These loads are distributed by formwork systems and backprops.

Construction status on the day of the incident

Figure 1 (below) shows a typical section showing the status of construction at the time of the incident when concrete was being placed to the Ground Floor slab. 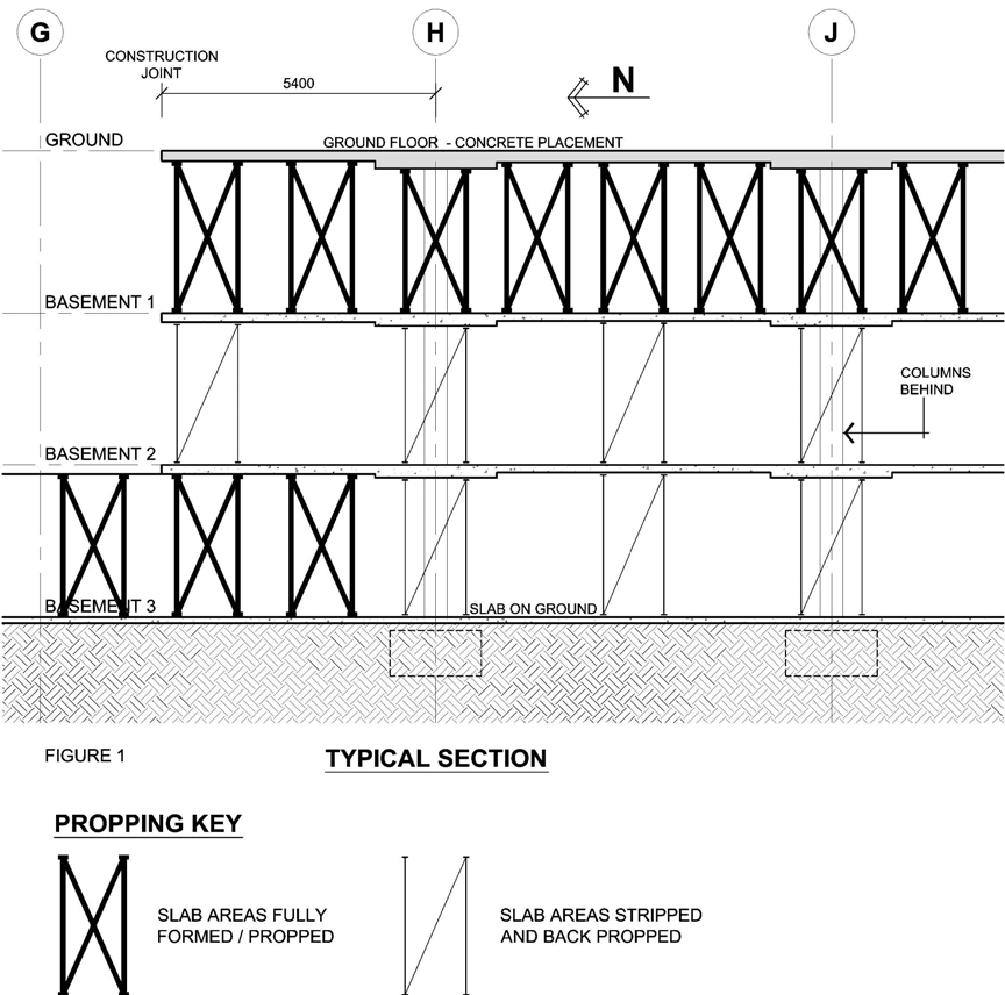 The suspended Basement 1 and Basement 2 floor slabs are designed as post tensioned banded slabs and both suspended slabs had been fully stressed and grouted. The sections of Basement 1 and Basement 2 slabs north of Grid H were detailed with a construction joint at approximately 2/3 span towards Grid G. The sections of slab between Grid G and Grid H were completed up to the construction joint only. They would remain in this condition until adjacent slabs, north of the construction joint were formed and cast. With limited capacity to act as a cantilever, these slab sections relied on formwork and backpropping for support.

Formwork and backprops on the day of the incident

Figure 1 shows areas that were fully formed and propped and those which had been stripped and backpropped.  In summary the installations were as follows:

Between Basement 3 and Basement 2, north of Grid H, the formwork remained in preparation for casting Basement 2 north of the construction joint.

Figure 2 (below) highlights the sequence of the three failures that occurred, leading to the collapse of the formwork and wet concrete to the Ground Floor. 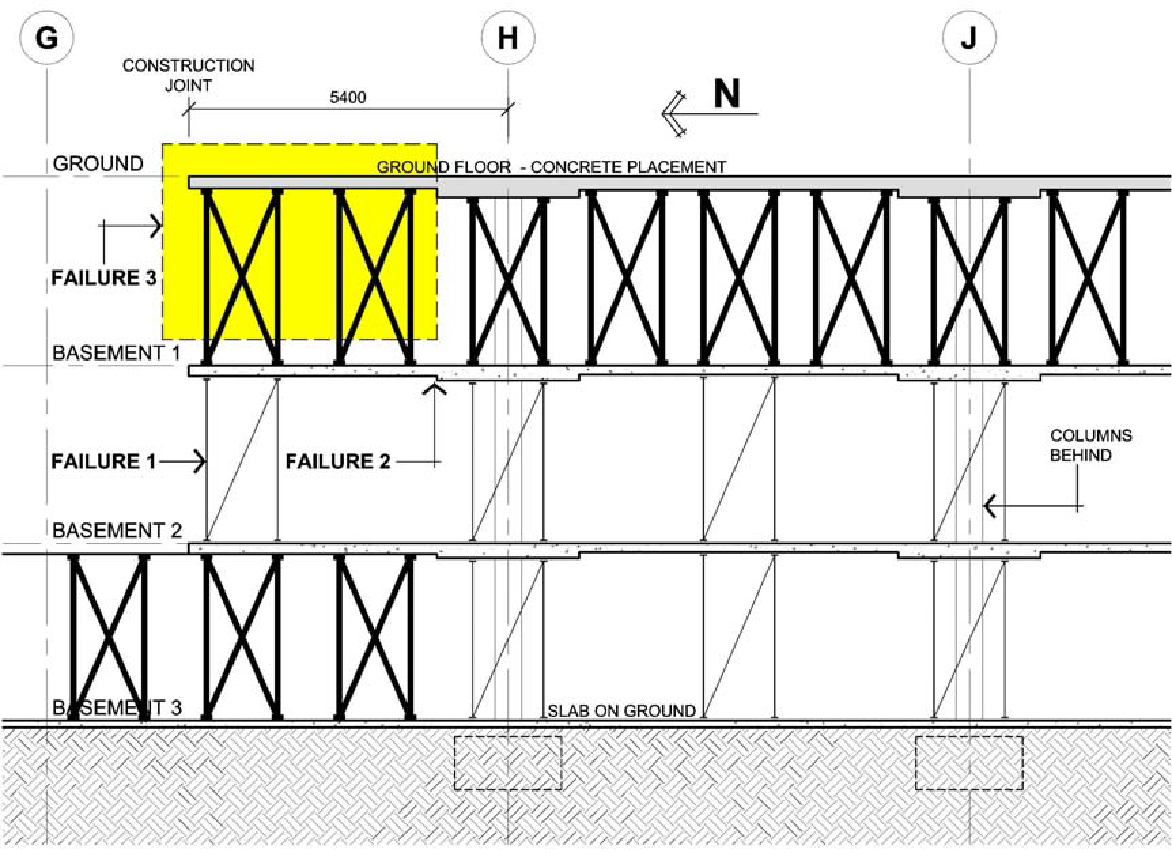 Failure 1 – Backpropping between Basement 2 and Basement 1

The result of the three failure mechanisms outlined above is demonstrated in figure 3 (below). 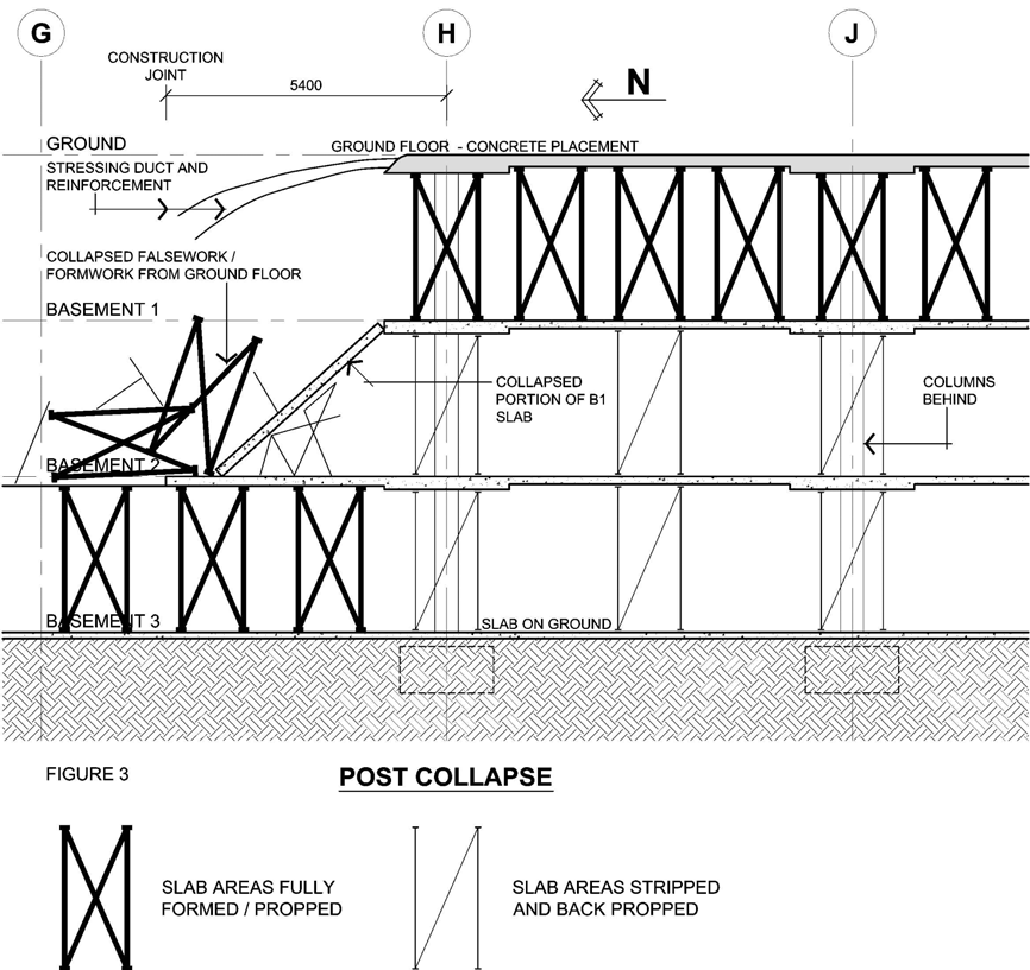 Principal Contractors must ensure that formwork and backpropping design drawings are produced that are project and area specific. This is because design loadings for the permanent structure vary from floor to floor, particularly as the project progresses from basement levels, through the Ground Floor and into typical tower floors.

The design drawings should take account of project specific issues such as: